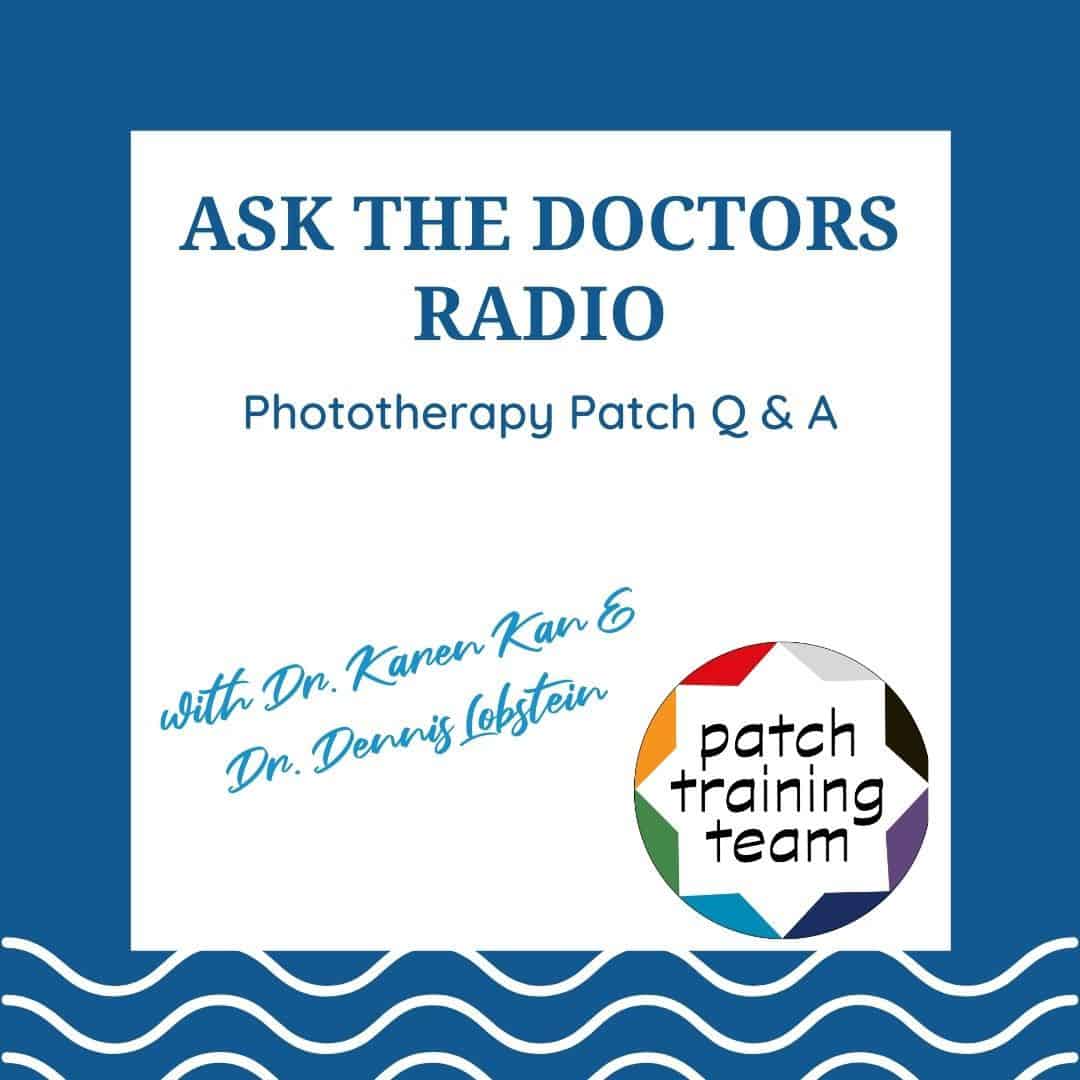 Dr. Dennis Lobstein and Dr. Karen Kan share phototherapy patch protocols live on the Light Warrior Radio Podcast. They will continue to answer questions on-air during the first Monday of each month starting at 12 noon Eastern in order to help customers, distributors, and users from around the world get the most out of their phototherapy patches.

Over the last several years, we’ve spoken about topics ranging from spirituality to pain, to detoxification, and addressed almost every organ in the entire body. You can find the archives by searching PatchTrainingTeam.com/blog for the topic you are interested in. The content is all free and sharable.

Folks that call in live, or post their question in the chat will be the first priority in our Q & A monthly radio show sessions. After that, I’ll take questions from the LW Phototherapy Patch Training Team Facebook Page, https://www.facebook.com/patchtrainingteam/events/ under the discussion tab.

You can listen to all the archives of Ask the Doctors phototherapy podcasts on Dr. Karen’s Podsite Page.

In the five-element chart, the top of the chart is usually designated as the FIRE element. Going clockwise, we have EARTH, METAL, WATER, and then WOOD. In the autumn season, we are entering the Metal season. that is when the energy is descending in Yin. In the winter, we have Water and spring is Wood. In the summer we have Fire. Early harvest season is Earth.

What is metal? It is also known as Air in other systems including Ayurveda. The real name for the five elements is Wu Xing (Five Phases). In the metal phase, we have two officials/organ systems. In Asian medicine, we are talking about the energy of the systems, not just the organs. This includes the yin which is the lung and yang which is the large intestine.

In the autumn, we have Yin sinking. When Yin sinks, people start getting depressed. We want to raise the Qi and relieve that. One of Dr. Dennis’ favorite points to help the metal/lung is to use the lower He Sea point of the large intestine. He Se points stimulate movement in yang hollow organs to clear blockages. Stomach 37 is a great point for clearing. You can use IceWave on Stomach 37 white on right tan on left.

The lungs receive energy from Sky. Dr. Dennis likes Lung 3, a window of heaven point because it can take energy from Heaven or Sky and move it into the body. It is located at the insertion of the deltoid on the upper arm. Raise your arm and touch the tip of your nose on your bicep. It is an easy way of finding it. It helps you see what makes life worth living. Lets light come in so you can “see”. It gets rid of the dark and the blockages that occur in that area of the window and are associated with Heavenly Justice, De Qi (original nature).

When autumn comes in there is sometimes a loss of self-worth and living more in a dark time. This point helps with self-esteem as well as a seasonal adjustment. Wounded warriors have a lot of injury from being traumatized. Lung 3 is a great point to use to support healing. This also helps you “see through the darkness”. You can use Energy Enhancer or IceWave on both Lung 3 points, white on right, tan on left.

He likes using Lung 8 to clear toxic energy from the lung meridian in combination with using Stomach 37 to clear toxic energy from the large intestine meridian. In this case, you can put the white on the YIN meridian (left Lung 8) and Tan on the YANG meridian (right Stomach 37) in this case using the Sky-Earth paradigm. If you don’t mind using two pairs of IceWave you can put both white patches above and both tan patches below.

Leslie W – Can you offer some good protocols for low anxious mood? Also, for bloating/gas? Thank you!

Rhetah – She has a couple people, one with extreme low mood who needs caregivers (a tremendous darkness) and won’t do anything for themselves. It’s been a slow spiraling down over 3 years. She is willing to eat but that’s it. Not wanting to brushing her teeth even. Dr. Dennis said this was not wanting to nurture self (since brushing teeth is gums which is spleen channel (earth) related) This is a major withdrawing happening. Another person who is normally very lively, has fallen into a deep low mood. Rhetah says there is less muscle mass as well.

Jerry – has someone who is feeling down and angry, irritable, with anxiety, lack of sleep, and mind racing. He is thinking about recommending the Aeon brain balancing protocol.

Sharon – using patches for five months. She had a car wreck years ago. She hasn’t found any relief from the pain in the hip. It is between the center of the back to the outside of the hip. It prevents her from exercising or doing a lot of physical work because of the constant pain. She doesn’t want to live on ibuprofen. She doesn’t have pain except when she moves. She’s using X39 daily and rotates through the others. She’s tried IceWave.

Vickie – She has a lot of stuff going on for 32 years. Constipation is one issue that is lifelong. She is emaciated and needs to gain weight and can’t. She also has a thyroid issue. She feels she has leaky gut. She’s been working with a functional medical professional but hasn’t really improved to an appreciable degree. She doesn’t detoxify well. She has great hair and nails after eating bone broth.

Cathy – Eye issues and cataracts?? We are improving eye cataracts energetically and would love your input per eyes/liver/kidney energy, to support the lens.

Nallely – Hello, I have a person who has pain on the left side of the neck. We tried with several patches: X39 and Aeon where the pain is but it does not seem to work. Btw, the pain is down almost on the shoulder.

Marty – had stem cell injections in both knees previously. She is using X39 for three months so far according to the brochure. David mentioned using Aeon and glutathione and carnosine on the knee separately. 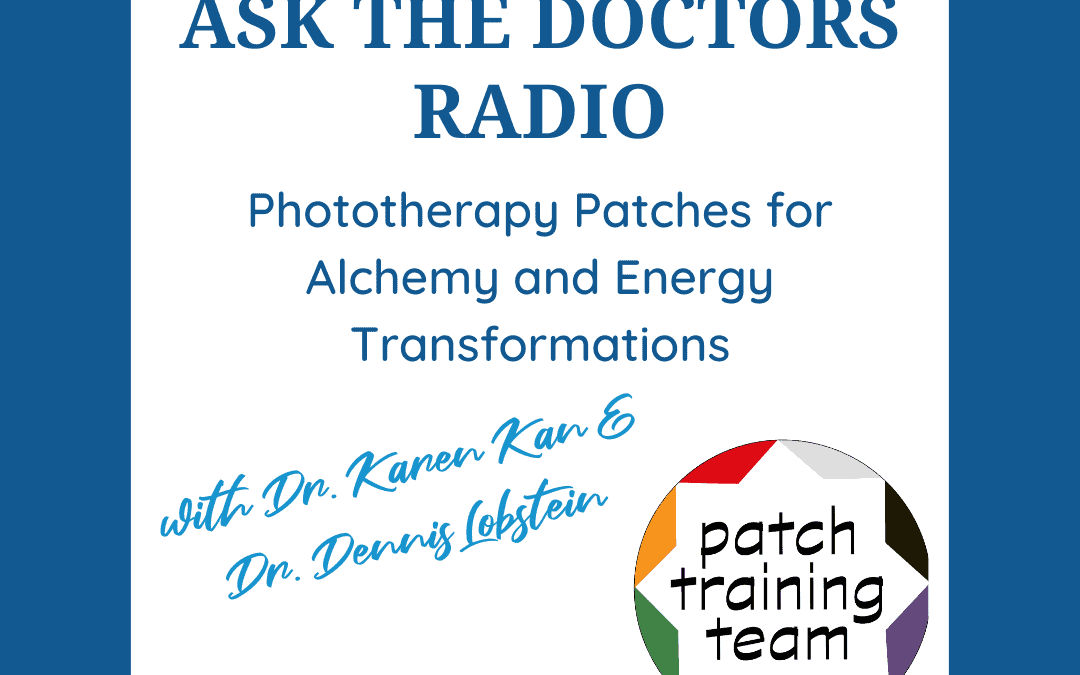 Dr. Dennis Lobstein and Dr. Karen Kan share phototherapy patch protocols live on the Light Warrior Radio Podcast. They will continue to answer questions on-air during the first Monday of each month starting at 12 noon Eastern in order to help customers, distributors,...

Look up acupuncture points mentioned here by going to YinYangHouse.com Click HERE to access the replay. Dr. Dennis Lobstein and I go LIVE on my Light Warrior Radio Podcast on the first Monday of each month starting at 12 noon Eastern in order to help customers,...

Look up acupuncture points mentioned here by going to YinYangHouse.com Click HERE to access the REPLAY. Marilyn – Calling for a friend with chronic pain. It is throughout the torso and through the body and arms. It is a pulsating pain. Sometimes in the lower... 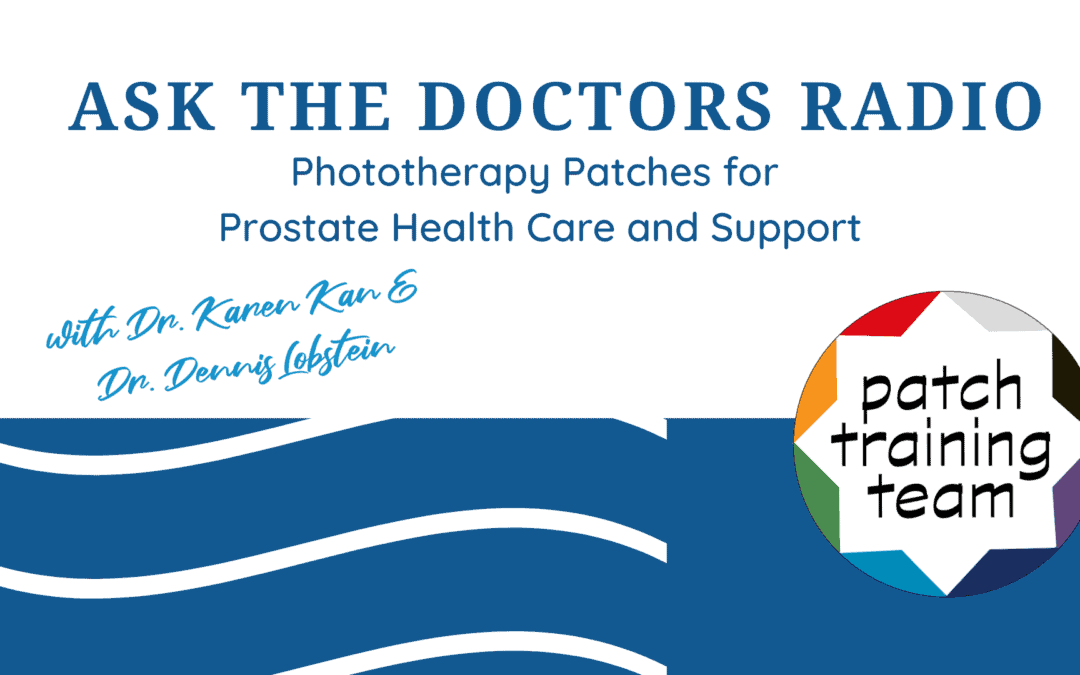 https://www.blogtalkradio.com/drkaren/2021/04/05/phototherapy-patches-for-prostate-health-care-and-support Prostates in men, especially elder men, need more testosterone and less estrogen, and that is because androgens such as testosterone keep the prostate...

Dr. Karen demonstrates the acupuncture points that you can use with LifeWave phototherapy patches to help the symptom of heavy menstrual bleeding or menstrual period cramps.