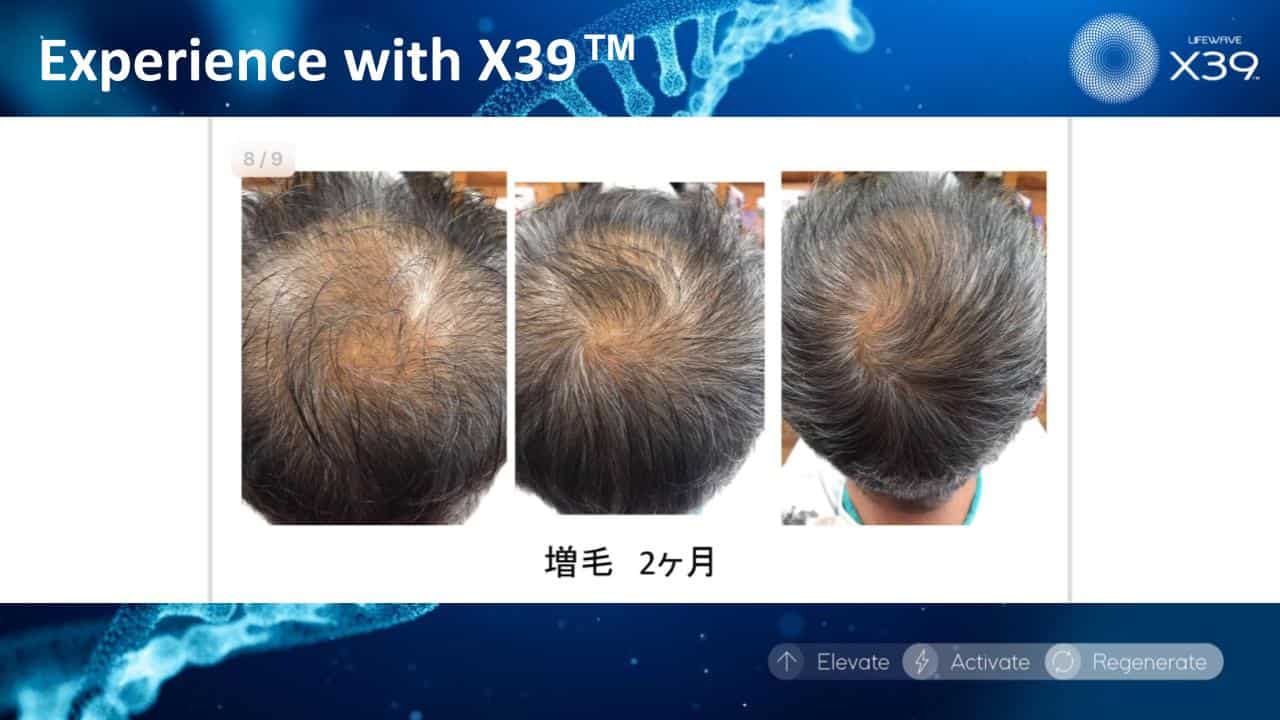 In this radio show, Dr. Lobstein, describes how to enhance your natural body's ability to support natural thickening of the hair on your head. In this show, we cover the Chinese Medicine theory as well, share some acupuncture points that beautify hair and optimize health, and how we can use LifeWave patches on these points. To look up acupuncture points, go to YinYangHouse.com

The classic story…Thousands of years ago, a middle age balding bachelor, Mr. Wu, finds a special vine and he eats this plant (He She Wu a.k.a Foti herb). He discovers its anti-aging effects. He gets married and 19 children and lives to 160 years old. The hair on his head turned from grey to black. The energetics of this herb are reflected in certain acupuncture points. 80% of the TCM is based on the energetics of the herbs. Just like nutrition has energy, herbs have energy. This Foti herb has multiple properties. It is anti-aging, supports cognitive function, and helps to reverse grey, dry and balding hair.

Men start balding when their testosterone is converted into DHT, dihydrotesterone, via 5-alpha reductase. Androgens stimulate dermal papilla on the scalp where hair follicles arise. They become dormant under DHT influence. Stem cell progenitors from which the follicles arose can be stimulated by stem cell therapy. That suggests the use of the X39 stem cell therapy patch.

Women can get thinning hair when they get older. Their testosterone also converts to DHT just like men.

There are several drugs that are used in Western medicine including finasteride. The side effects include depression, prostate cancer risk, among others. It decreases DHT by 70%. Approximately 9 million men are prescribed this as Propecia. Rogaine, minoxidil, has vasodilator effects. It treats adrenergic alopecia where the hair disappears from the front of the hairline. The hair pattern grows like a torsion field and this field gets weaker as we get older. At the top of the head, the Yang Qi is leaving the top of the Tai Chi pole.

Other Western techniques include surgery and other drugs. Sildenafil is sold as Viagra but was originally meant to reverse baldness.

Why does Dr. Karen have more white hair at the top of her head since doing lots of galactic and cosmic healing? Dr. Dennis says that she is having lots of Yang Qi coming in and out of the Tai Chi pole. That is powerful light. That might be overpowering the pigment cells in the follicles. Is this a paradoxical effect instead of an aging effect?

In Chinese medicine, the herbs also increase libido, reversing baldness and turning grey hair back to dark. That implies a change in the sex hormones. In Asian medicine. In the Yellow Emperor's Cannon, there is a substance called Tian (sky) Gui (water) (heavenly water). This is likely the gonadotrpics or sex hormones in Western medicine. The Gui – the yin aspect of water – gives the substance of Qi. Tian Gui works in puberty to mature people.

Women go every 7 years with changes in their development whereas it is 8 years in men. The kidney Qi is the most involved in this. In the ancient text, it describes “hairs begin to fall” around age 40 in men. In women, it is age 35 where the hair begins to fall.

According to the ancient text, the head hair is the external bloom of the kidney. It isn't just the kidney Qi, the energy behind the libido and central nervous system and the “batteries” through the Life Gate (GV4). air is also nourished by liver blood. The kidneys are the mother of the liver Qi in the five elements cycle. So we need good kidney Qi to have good liver Qi in order to have healthy thick hair.

Tonifying kidneys and restoring the liver blood is the main treatment for these hair thinning symptoms. It also helps with libido and erectile dysfunction. When the Zang are diseased, use Yuan Source acupuncture points. The Zang are the Yin organs according to 5 elements theory. If we're looking at kidney and liver, both are Zang organs.

To tonify kidney we'd go to the Source point and that is Kidney 3 on the inside of the ankles. The Source point for the liver, we use Liver 3. The liver channel circumscribes the genitals and has an internal branch going to the apex of the head.

You can also use Alavida to manage endocrine function through the pineal gland.

Nirvana Products helps endorphins and encephalins so it can influence the gonadotropin which then can influence hair growth theoretically.

The Winfit patch has anabolic effects, so if you have any, that may be supportive as well. They are no longer being sold by LifeWave.

Silent Nights can be used to decrease conversion of testosterone into estrogen by blocking aromatase in the pineal gland. It is there to stimulate melatonin. Melatonin decreases activity of aromatase enzyme which converts testosterone to estrogen. Thus using Silent Nights patch may be supportive.

Glutathione patches maybe helpful because it is an anti-oxidant and it has aging effects. Toxins that interfere with gonadotropin and their activity. Aeon and Carnosine are also anti-aging and anti-oxidant. They can support the anti-aging effects. Stress is a major factor in aging. The antioxidant nature of the patches (and anti-stress effect of Aeon patch) help to reverse this process.

GV4 – Life Gate – supports Yang Qi and ascends essence to the brain/head. It is the “palace of Jing” and the root of the five Zang organs according to another ancient Asian text. It is below lumber vertebrae 2.

If all you're going to use is one point, use the GV4 Life Gate or top of the Tai Chi pole which is GV20 with X39.

Vickie L. She has been using the X39 and not often. She has a lot of neck and shoulder pain and scoliosis. She had that calmed down, however when she started X39 she got more pain. Is it because she is extremely thin and too yang? She experimented with using it less, maybe 4 hours at a time. She has Wilson's disease and has too much copper. Does this affect X39? When she first used X39, she was ecstatic. She got energy! Her pattern over the years is that she gets blocks. Waxing and waning with the chronic fatigue.

Answer: Pain in Asian medicine is due to blockages. She can use different patches to unblock these patterns such as IceWave. Sometimes using a new patch causes you to detox so you can use them less often or for less amount of time. She has kidney and liver issues. She isn't sleeping well because she is peeing all night long.

Dr. Karen said that just because she has excess copper, it doesn't mean she is making more GHK-Cu.

Start with Aeon for brain balancing for 2 weeks at night while sleeping. She can add a second one on the belly button CV8 for polarity balancing. Then Dr. Dennis said she needs to reset the Kidney YIN. Use IceWave on Kidney 9, she'll reset her YIN at the same time using X39 on Liver 3, 1-2x a week. If she feels she has heavy metals, then maybe using Glutathione patch right over the liver 14 (front Mu point of the liver). Take off the X39 when she feels like she is “done”.

Rebecca – has female pattern hair loss. She noticed that her hair has grown amazingly in the two months from the X39. She has a non-dominant hand tremor. It was bothering her a lot. She put the IceWave on and it made her wrist swell up terribly this morning and caused her extra pain. She had put them side by side on the wrist. She went to the acupuncturist this am. What would be a protocol for tremor reduction? She is more thirsty with the patches on.

In Asian medicine, tremor is excess wind. Use any negatively charged patch (Sp6C, Tan patch) left Liver 3 and any of the positive patches (like Y-Age or X39) on right Gallbladder 39 because it is an influential point for marrow, helping sinews and bone pain. She can add Glutathione later if she wishes such as CV 4 on the low belly. It is the gate of origin and it will tonify the essence of the Zang to nourish those organs and support the spleen. It treats kidney deficiency. It makes a nice triangle.

Vickie – 26 years old son facing thinning hair. He has mold in brainstem and dry eyes and allergies. He lives in Los Angeles.

Answer: Dr. Dennis and Dr. Karen suggested X39 on the governing vessel 20. Option 2: Gallbladder 37 on the right and Carnosine next to the eye at night. Rife frequencies can be used to cancel mold frequencies. It shatters pathogens through frequency. Dr. Karen suggested BalancingbyNumbers.com and looking up the anti-mold frequency to cancel it or using TOLPAKAN™ Healing Method to pull them out.