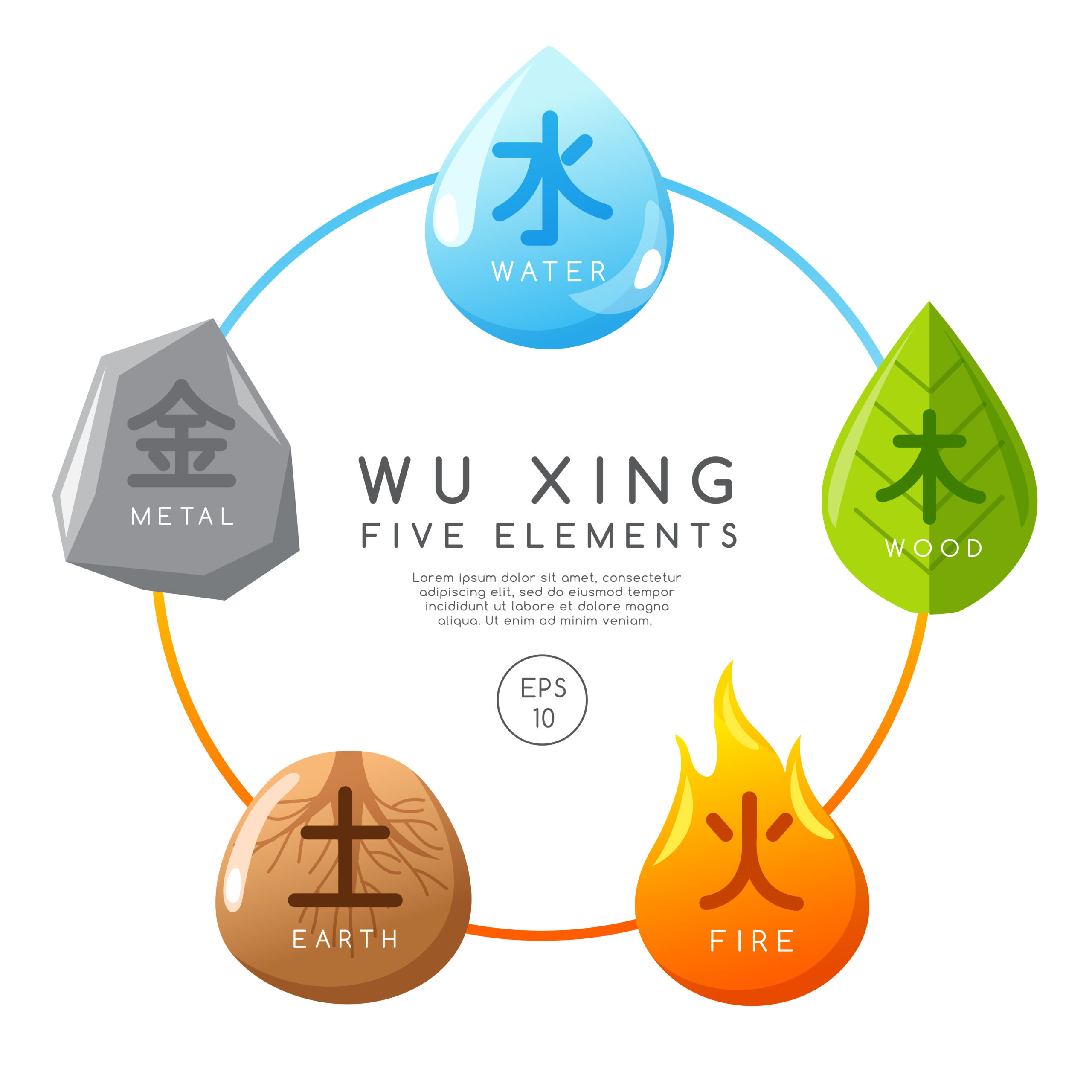 In this podcast with Dr. Dennis Lobstein and Dr. Karen Kan, the 5 Element paradigm is reviewed as it pertains to the frequencies of specific LifeWave patches. They overview what each of the phototherapy patches does and suggested points to optimize the 5 elements balancing effect. For acupuncture point locations, go to YinYangHouse.com.

Listen to the show below:

Patch Polarity and How They Work

The white patch of the Energy Enhancer is YANG and it tonifies the energy on the acupuncture point. When viewed as electrodes, a positive and negative pole and sets up a potential difference and thus you're running a current through the body which is like a semi-conductor. Besides electrical polarity, each patch has its own frequency set. Frequency is the oscillation of the waves of light that are emitted, which is activated by body heat. The frequencies are carried like a wave through the acupuncture meridians through the liquid crystal water, to the cells.

The main twelve meridians run along the body under the skin and usually above the muscle, often in fascial planes. The cells have a glycocalyx meaning that the lipoprotein coat has antennae. Those antenna proteins with carbohydrates attached to them. when the signal gets there, it vibrates the antenna and transduces the signal into the cell. Intracellularly, the microtubules in the cells are like optical fibers that transfer that light from the surface of the cell to the DNA of the cell. The patches transmit light from the patches to the DNA of the cell. The DNA emits light itself.

LifeWave Patches within the 5 Elements Paradigm:

Wood is the mother of Fire for example. To get more energy you can use the mother (the element before the element you want the energies). In this case you could use Wood patches and meridians to support the energy of FIRE.

Below is a list of the patches according to their ELEMENT and points you can use to support that element.

You don't get wired because it enhances oxidative fat burning. It isn't like a stimulant like caffeine. It simulates the effects of being aerobically fit so you're increasing fat catabolism – being able to break down fat to release energy, as opposed to using mostly carbohydrates for energy. which generates more ATP as energy, which is why people experience more energy and endurance while using this patch. Energy Enhancers also help to release lactic acid, which can cause fatigue.

In studies, the heart rate variability (HRV) is improved. There is no adrenal stressing effects of Energy Enhancer patches. When you are relaxed, the HRV is improved. Energy Enhancers actually improve HRV similar to regular aerobic training. By switching polarity of the energy enhancer, in Dr. Dennis' experience it may help with sleep without negative consequences.

By decreasing lactic acid, you make a more alkaline environment. The energy enhancers are known to decrease lactic acid. Carnosine also helps with lower lactic acid and you can put it right on top of the painful muscle cramp area and it helps this symptom.

Reversing the Polarity of the Patches for Stubborn Sleep Issues.

If the Silent Nights patches no longer work for sleep anymore because you got used to the signal on the same acupuncture point you can use Energy Enhancer patches on the arousal BL62 point and rest KI6 point. You're going to sedate the arousal channel and tonify the rest channel in this protocol.

TAN on left Bladder 62 (pulling energy out of the arousal channel) and the WHITE on the right Kidney 6 (stimulate the rest channel). He uses it as a last resort in case other sleep protocols don't work.

It curbs cravings and increases satisfaction and reward. It gives properties that reflect endorphins (Dr. Dennis' clinical observation, not researched). When those hormonal shifts occur, Leptin and Ghrelin may be affected (hunger signals). A balance between leptin and ghrelin helps the appetite. The SP6C increases energy at the same time it curbs cravings, possibly by the above-mentioned mechanism

Spleen 6 acupuncture point, left, is a great point to use SP6C patch. It is the junction point of three different yin channels. The SP6C patch is electronegative and goes on the left side of the body (or midline is okay too). He also loves using it on the Tian Wei point (stop addiction point). You put it on the left, halfway between Lung 7 and Large intestine 5. If you pretend you're shaking hands with someone, put the edge of the SP6C patch on the wrist crease below the thumb and you'll find Tian Wei.

Breaks through blockages and gets rid of pain. According to Dr. Dennis, using a drop of herbs or essential oil under the patch will drive the frequency of those into the body with the patch signal. According to the thermal photography studies, the inflammation is reduced within a few minutes. LifeWave has done human and horse studies. Great points for IceWave in the metal element: Lung 9 and Large intestine 4. You'd use TAN on left Lung 9 and WHITE patch on right LI4. YinYangHouse.com for acupuncture point locations and descriptions.

Alavida works the pineal body and calms down the limbic brain which has an effect on hypothalamic releasing factors and our whole endocrine system. It is an antioxidant and repairs collagen and elastin and may have the ability to support unclumping the red blood cells. This may help people with clumpy blood, which can happen with toxins, infections or EMF radiation toxicity. When you unclump the blood, the oxygen can be transferred from the blood to the cells more efficiently. Best point is Yin Tong – third eye point on the middle of the forehead when you sleep at night as it is the perfect point to stimulate the pineal gland. It can also help with clearing sinus symptoms using that point

It decreases irritability and increases calm and enhances mood. It increases beta-endorphins from the supplement. When dopamine is balanced, that can help with down mood. Dr. Dennis loves using Gallbladder 8 point which is the meeting point of Gallbladder and Bladder meridians. Great for treating alcohol intoxication. That might be a good point for detoxing. Dr. Dennis would combine Nirvana right GB8 and a negatively charged patch such as SP6C on LU 8 for major detox.

It is designed to increase melatonin secretion from the pineal gland. that has an effect of increasing testoterone by blocking aromatase. Increasing melatonin may help support the prostate through this mechanism. Dr. Dennis likes putting it on the LEFT Kidney 6 (advanced protocol – normally you put positive patches on the right side) because it is the master point for rest. This is stimulating the master point for rest and the left Kidney 6 is more Yin than yang. Of course, you can use it on the RIGHT kidney 6 instead of the left. Spleen 6 and pericardium 6 are excellent points to use for sleep as well. You can also use the ShiMian point on the bottom of the heel on the plantar aspect. He also likes Silent Nights on the right temple.

Decreases apathy, fear, overstimulation/excitability in Dr. Dennis' experience. He put Silent Nights on his dog's collar and he calmed down.

Dr. Dennis likes to use Governing Vessel GV24 on the midline above the nose 1/2 cun behind the hairline. That may help to support brain repair and sleep. GHK often dramatically decrease as we age but using X39 patch, the levels go up to younger levels!

Mitocopper is a copper supplement linked with niacin may help to support copper peptide production. Chloroxygen drops may also boost copper according to Dr. Dennis.

It reduces inflammation and balances the stress symptoms. It decreases cortisol, C-Reactive protein, fibrinogen, lipid peroxides, homocysteine, and sympathetic tone according to the research. It also increases superoxide dismutase (normally you'd do aerobic exercise for this effect) and parasympathetic tone and possibly has a positive effect on sex hormones in the process. The Burzynski peptide, phenylacetylglutamine (PAG) is low in people who have cancer. LifeWave does not claim to treat or prevent cancer. Aeon seems to help balance PAG. Aeon on GV4 Life Gate is Dr. Dennis' favourite point.

Anti-aging, antioxidant, and anti-aging effects. it is the body's master antioxidant and replenishes other antioxidants such as Vitamin C. It helps get rid of free radicals which can cause aging. glutathione uncouplings the C-reactive peptide from leptin so it can go through the blood-brain barrier and inhibit hunger. His favorite point is Conception Vessel CV 12 and it regulates rebellious stomach Qi, causing nausea, dizziness (both feeling faint or feeling spinny), and vomiting.

Dr. Dennis likes using this on his cell phone to increase body coherence when he is using his phone. putting it on an Ah Shi pain point releases cramps. It benefits skeletal and cardiac muscle with magnesium. It is an antioxidant. It rejuvenates and regenerates tissue. Helps with strength and flexibility. Increasing carnosine may help clear glycation off the lens of the eye which can crystalize and cause vision issues. Carnosine protects the brain from plaque and plumps up cells. Plumped up, younger cells, have better electrical potential, making them “younger”. It improves athletic performance and flexibility. Dr. Dennis likes Carnosine on Conception Vessel CV3, which tonifies kidney Qi and good for overall muscle cramping and stiffness.

Running Piglet Disorder – extreme anxiety running through the stomach chest. You can use Kidney 13 on each side of CV 3 to help with this. Kidney 13 is the Qi Cave.

Elizabeth – how long should you use a protocol? She has hot flashes and tried many different ones for a week without success. Dr. Dennis says that the effects are usually fast when you use the right protocol. SP6C on left spleen 6 and Aeon on right triple burner 17 behind the right ear. Elizabeth mentions that one didn't work. She is vegan. Maybe she doesn't have the amino acid balance to maximize the creation of peptides necessary for the patches to work. Dr. Dennis mentioned doing the Aeon brain balancing protocol for two weeks, then doing the five elements detox protocol (for a week or more, then increase micromineral nutrients and electrolytes. Stretching will increase the circulation of the lymph and the oxygen delivery to the tissues will be improved and toxins can move out easier.

Carla – hand tremors on both sides of the body. In Asian medicine, tremors are internal wind from liver qi stagnation. The main point is Liver 3 to release liver qi stagnation. Dopamine deficiency in the basal ganglia can cause these symptoms in Western medicine. Nirvana on RIGHT Gallbladder 8 (just above the top of the ear) and put a Tan patch or SP6C patch on LEFT liver 3.